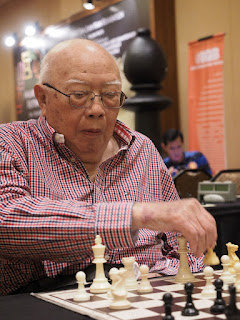 Since 1974 Dato' Tan had been at the helm of Malaysian chess - for many decades he the President of the Malaysian Chess Federation while also being its biggest patron - and from 1986 to 1990 also served as FIDE Deputy President for Asia and then from 1990-1994 as a member of the FIDE Executive Board.

Not many people today know that it was Dato' Tan who originated and introduced Rapid Chess to FIDE and to the chess world.

The FIDE and Asian events he brought to Malaysia are simply too many to list, and include a World Championship Match, Interzonals, World Youth U-16 Olympiad and numerous Zonals, the only one missing was perhaps the World Chess Olympiad, and even today it is because of his vision that we have the region leading Malaysian Chess Festival for 15 years now and still counting.

Dato' Tan was a man of many interests, or more accurately, passions, where chess perhaps just trumped horse racing, but more important was that in all that he did, he was a huge success.

A successful entrepreneur and businessman who rapidly became one of the top ten richest men in Malaysia, he was always a visionary and innovator, and was instrumental in bringing to and supporting chess in China - the Big Dragon Project - whose rise as both a global economy and chess powerhouse he long foresaw.

Dato' Tan's passing will leave a vacuum in Malaysian chess that will be impossible to fill and Asian chess will be very much poorer for it while FIDE has lost a good friend who embodied "Gens Una Sumus".

Yet, for those who knew him best, it was not his leadership, his generosity and patronage of the game with the endless sponsorship, or even the paradigm changing initiatives, but the many hours watching and playing chess with a man who came to chess late but whose love for it was second to none and who just wanted to be a better player than he was the day before.