Will I actually find the time to be able to be part of a once in a lifetime trip? 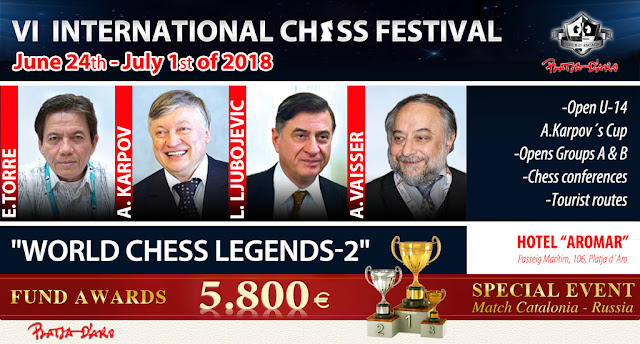 Few know this but I am working on a book with Eugene Torre and at one of our sessions he was kind enough to invite me to be his second at "World Legends", obviously the highlight of the sixth edition of the International Chess Festival "Vila de Platja D' Aro".

Just imagine to be part of an event where my chess hero, the former World Champion Anatoly Karpov, the legendary Yugoslav Lujbomir Ljubojevic, and current World Senior Champion Anatoly Vaisser, will all be in battle with our own Asian great!

In Catalonia, Spain... Barcelona, and with my good friend, David Llada, the very best chess photographer in the world, and most importantly, a known gourmet, also in attendance all way from beautiful San Sebastian at the opposite end of the country.

Click on http://view.chessbase.com/cbreader/2018/6/5/Game755260234.html to see Torre's sensational win against Karpov in the time he was practically unbeatable on way to winning an event which can be a predecessor to "Word Legends".