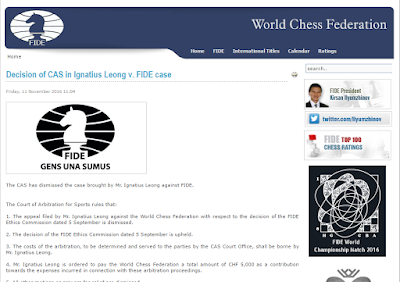 
There is almost a parallel to what happened to former FIDE Vice President P.T. Umer Koya who was similarly accused of corruption... both also losing control of their respective national chess federations.

BUT WITH ONE SIGNIFICANT DIFFERENCE:

KOYA WAS SANCTIONED IN NUMEROUS COURT LEGAL PROCEEDINGS IN INDIA AND AFTER LOSING HIS ALL INDIA CHESS FEDERATION POSITION, THEN ALSO LOST HIS FIDE POSITION.

LEONG, ON THE OTHER HAND, WAS JUDGED BY A FIDE ETHICS COMMISSION WHOSE SCOPE AND MANDATE WAS SEVERELY LIMITED SO AS TO ESSENTIALLY HAVE NO OPTION BUT TO  RUBBERSTAMP REVENGE BY HIS FORMER LONG-TIME COLLEAGUES IN FIDE HE HAD "BETRAYED" BY SWITCHING SIDES IN AN ELECTION THAT IF HE WON WOULD HAVE TAKEN EVERYTHING FROM THEM.

We should know well that this is the price one often pays in politics when aiming for the top job and falling short! 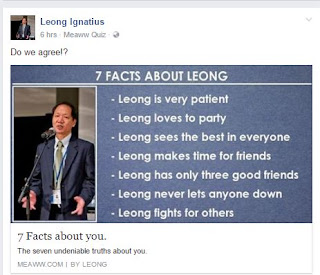 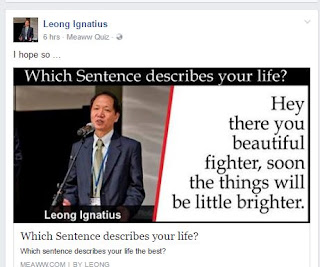 But life goes on. Finding solace on FB? Why not? That's one use of Social Media!