By Peter Long - May 13, 2016
I had unfortunately missed the Selangor Open due to the Churchie International in Brisbane but on my return to KL I dropped by the DAT Chess Centre to discuss the FIDE Arbiter's Seminar to be held in Pattaya from 31 May to 4 June 2016 where I will be assisting Hamid Majid.

After we concluded, Hamid, to my surprise, asked my opinion about the decisive game played at the Selangor Open between Yeoh Li Tian and eventual winner Oliver Dimakiling which he was watching as Chief Arbiter and even had some specific questions. I am of course quite familiar with Li Tian's game and understand well his weaknesses (and of course also his strengths) and so I was a little reluctant to discuss what I know.

But as we went through the game, actually one that was rather typical of Li Tian's play, we reached a position where Jimmy Liew (who was watching us analyse) immediately agreed with me was lost after the exchange of Queens but then I suddenly realised that capturing the pawn on f3 was a blunder by Oliver and that the position was in fact drawn! 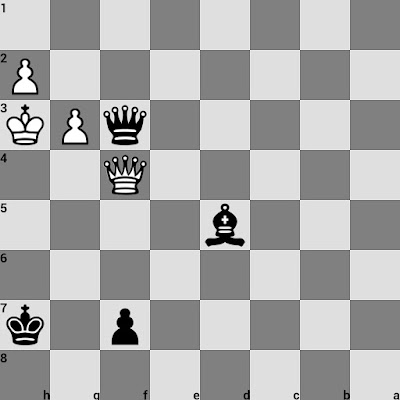 This loss was a big price to pay as it was not only the difference between first and second place but also cost Li Tian his final International Master title norm.