Malaysia's No. 1 Dilwen Ding Will Be Playing In The Selangor Open 2016!

By Peter Long - April 24, 2016
Malaysia's No. 1 player opted out of the Malaysian, Penang and Johor Opens last year and then declined to play the National Championships and the Malaysian Masters this year and so will almost certainly not be at the Olympiad to help the Malaysian team. 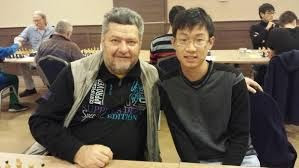 Dilwen with the famous organiser of First Saturday Lazlo Nagy, an Arena International Master who was in awe after their game: "I could feel his talent".

The above was extracted from the list on entries for the coming Selangor Open posted on http://selangorchess.blogspot.my/.

So now it seems that after two years we will finally have the privilege to see in action once again a still young player who last played locally at FIDE 1800 level (his national rating is still 1717) but since then has gained some 500 rating points and gotten at least one IM title norm from events in his favourite hunting grounds in Hungary.