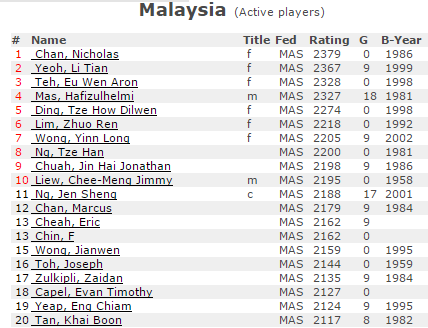 Well, it is a new year so I thought it was not a bad idea to show where our players are by this now"universal" and certainly official measure.

To start with, in relation to the rest of the world, Malaysia ranks 85th from the 172 countries which have an entry on the FIDE rating list. In ASEAN, we are now only ahead of Thailand, Brunei and Laos (Cambodia is not listed as still without sufficient rated players notwithstanding Paul Truong's transfer from the USA).

Also we have a beather measure than usual because in December alone many played one of or even both the Penang and Johor Opens and in the case of Yeoh Li Tian and the Azman Hisham sisters, in the 3rd ASEAN Championships.

A notable fact is that based on his performance in the ASEAN Championships, Yeoh Li Tian will finally overtake Nicholas Chan and make official the fact that he has been our No. 1 player for at least the  last 18 months.

In general the trend is however a decline in ratings for most of our players although some juniors have certainly benefited from the new K-40 factor.