Malay Mail Online: Sometimes, It Is Not Even About The Game 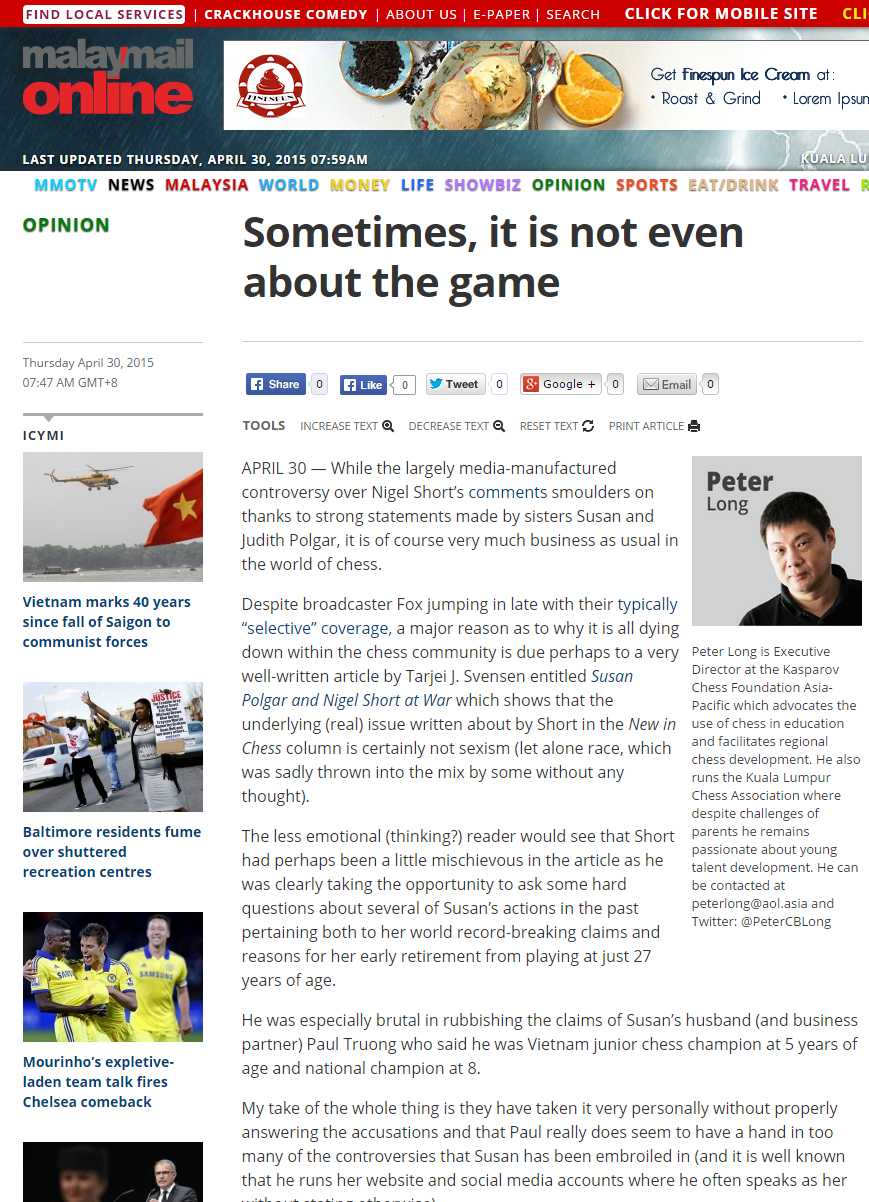 http://www.themalaymailonline.com/opinion/peter-long/article/sometimes-it-is-not-even-about-the-game
Posted by Peter Long at 08:06 No comments:

Malay Mail Online: So Men And Women Are Different... And That Is Not A Bad Thing! 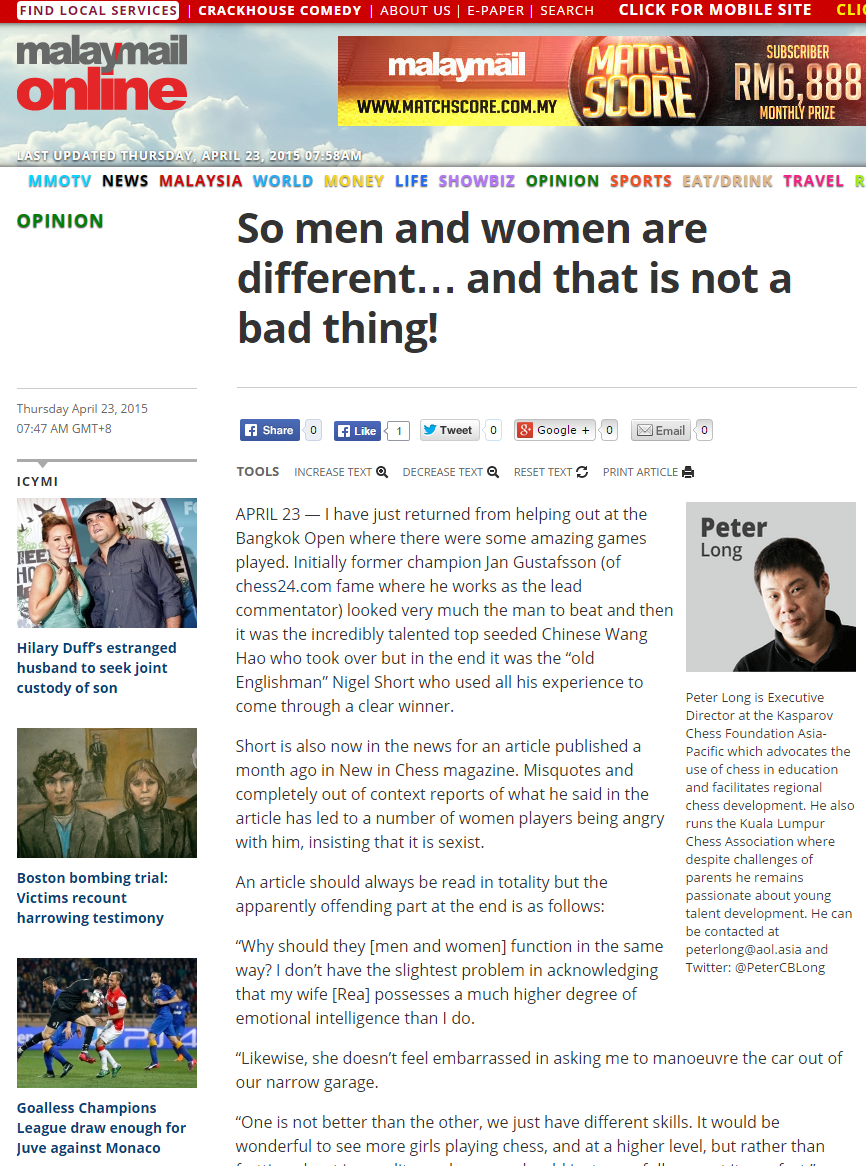 http://www.themalaymailonline.com/opinion/peter-long/article/so-men-and-women-are-different...-and-that-is-not-a-bad-thing
Posted by Peter Long at 08:06 No comments:

Rules (Or Not) Of The Game 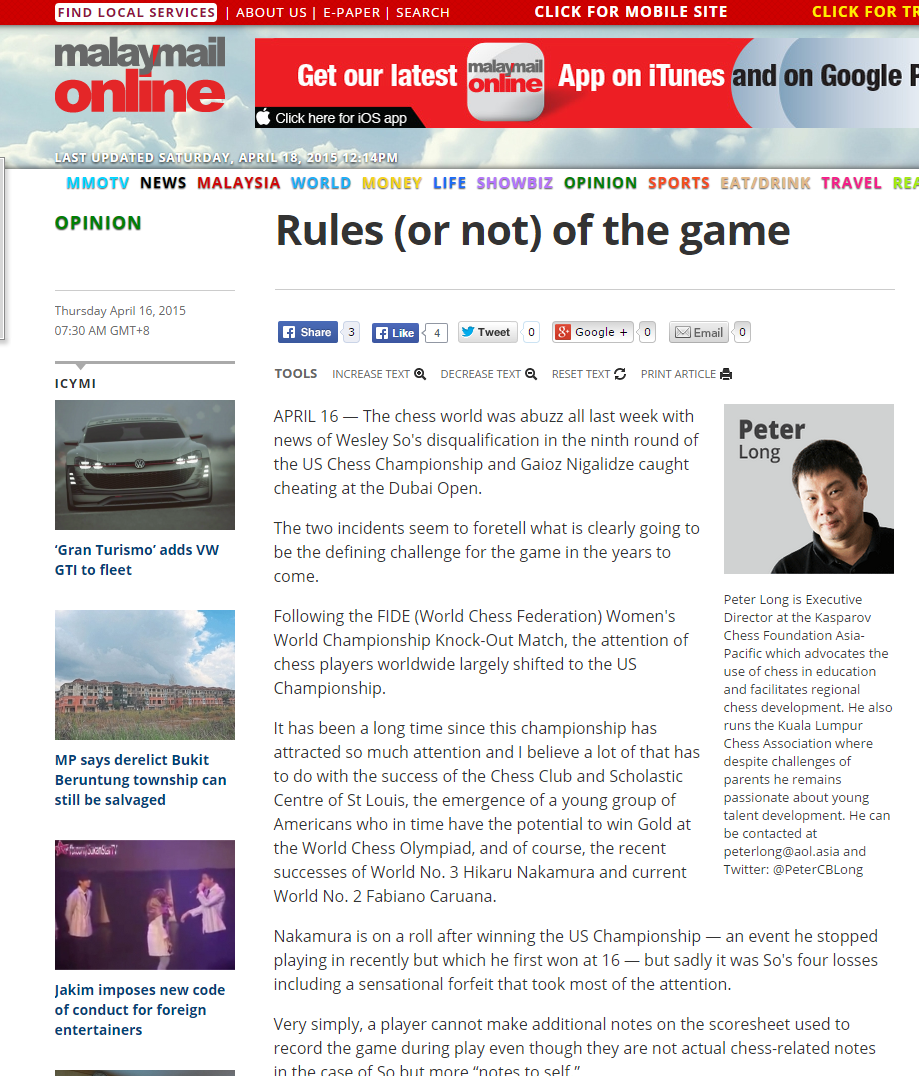 http://www.themalaymailonline.com/opinion/peter-long/article/rules-or-not-of-the-game
Posted by Peter Long at 12:19 No comments:

Let me state right at the top of this that I write my own emails and NO ONE controls my communication, or when and how I choose to communicate. I am not cut off, isolated, drugged, in bondage or kidnapped. I do not belong to anyone but God. I am a man who wishes to be let alone to find his own life.

Leny So, I was NOT HAPPY that you suddenly showed up in my life, unannounced, at the biggest tournament of the year, and that you came with Susan Leonard whom I hardly know. In the last six years I’ve only see you once a year for about a week, I hardly know you either. And you certainly don’t know me to even suggest that I am anyone’s personal zombie.

All your statements to Chessdom (http://www.chessdom.com/eleanor-so-wesley-was-very-happy-to-see-us-in-st-louis/) are sad, ridiculous and completely untrue. You exposed my emails? Should I send out a few of the many you’ve sent me over the years where you call me putang ina mo (kinda funny that) and threaten me with being cut off from the So family forever if I do not do what you want?

Photos can lie and those do. I was desperately trying to be nice hoping you and Susan would leave more quickly. I see it was a mistake. Lotis even invited you to come to Minnesota to talk to me there, not here. What was your answer to her? You asked if she was going to pay for it.

I am uncomfortable around you. You want me to respect you but you have never respected me. You left me when I was sixteen, telling me to become a man and find my life. Well I have found it, you just don’t like it.

For your information it was not the Key family who wanted to go to the media. It was me who pushed them to speak out for me because I was going crazy with anger, after you revealed to us your involvement with Paul Truong (come on, you know you told me right here in my room that he had given you my flight information, arrival time and room number). You insisted that was all it was and you never met him or saw him. Yet right there on Chessdom are pictures of you posing at Webster.

Calling your room to check if you had left yet, the operator would not give me the information unless I gave them the name of the person in the room. I tried your name. No. I tried Susan’s name. No. Then I guessed Paul Truong and yup, the operator told me that was the name on the credit card. She even spelled it out for me.

That was when I had you banned from the Chess Club because you were lying to me from the moment you said hello. The stress of finding out your betrayal ruined my tournament.
Screaming curses at me in the street, grabbing my arms and trying to drag me along with you?

Humiliating me in public? Your way of showing love? And you think it strange that I ask people I trust to be with me all the time? I ask the Key family to accompany me to tournaments to help me. It does not isolate me, it protects me.

Stop blaming our terrible family relationship on the innocent family that has provided me with help and support. They took me in when I needed someone and have worked hard to guide and nurture me. They take nothing at all from me and you know that. They are always there for me helping me at great inconvenience to their own lives, and instead of thanking them you have maligned and smeared them to make yourself look like a loving, concerned mother. Lotis was always advising me to try and repair my relationship with you and I could never explain why I just can’t. At least now she can see it for herself.

So how about my bank account numbers please? You know? My life savings you said were keeping for me when I was a minor? I have already contacted Royal Bank of Canada, and strangely, the bulk of my savings is not there. Want to explain that publicly?

And those furious emails I sent you were certainly not written during match times because I wrote them myself, here in my hotel room. The Key family never even saw, or knew about them.

http://www.chessdom.com/15th-bangkok-chess-club-tournament/
Posted by Peter Long at 10:27 No comments:

Every year Indonesia holds the JAPFA International Chess Festival in Jakarta and this year the highlight is the GM Tournament.

So the Kartika Chandra Hotel will see from 14-23 April a 12 player round robin headed by my good friend Sergei Tiviakov (Nederlands) and in the fight for the first prize he is expected to be be joined by three other grandmasters and they are GN Gopal (India), veteran Rogelio Antonio (Philippines), and another of my very good friends Nguyen Anh Dung (Vietnam).

The Indonesian players are clearly all playing for international norms and titles.

JAPFA GM has a very nice mix, the addition of two women International masters, Alina L'Ami (Romania) and Sophie Milliet (France), making it a total of six foreign and six local players (and which also ensures that there are eight men and four women playing).

Games will be broadcast live but with a bit of luck I might be able to find time to attend the last round and closing ceremony of a very interesting tournament.
Posted by Peter Long at 05:55 No comments:

Malay Mail Online: Another Look At Women In Chess 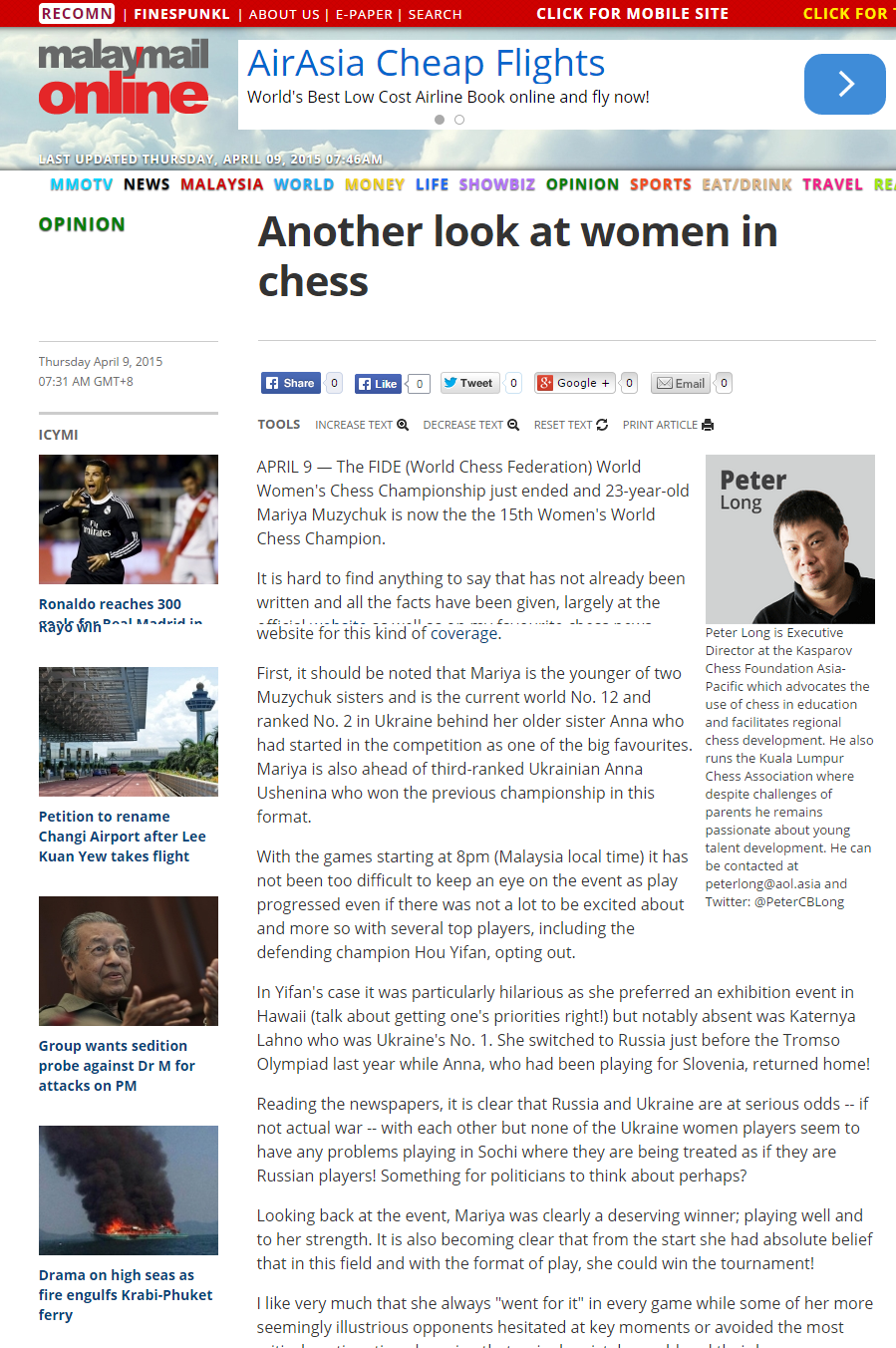 http://www.themalaymailonline.com/opinion/peter-long/article/another-look-at-women-in-chess
Posted by Peter Long at 07:51 No comments: 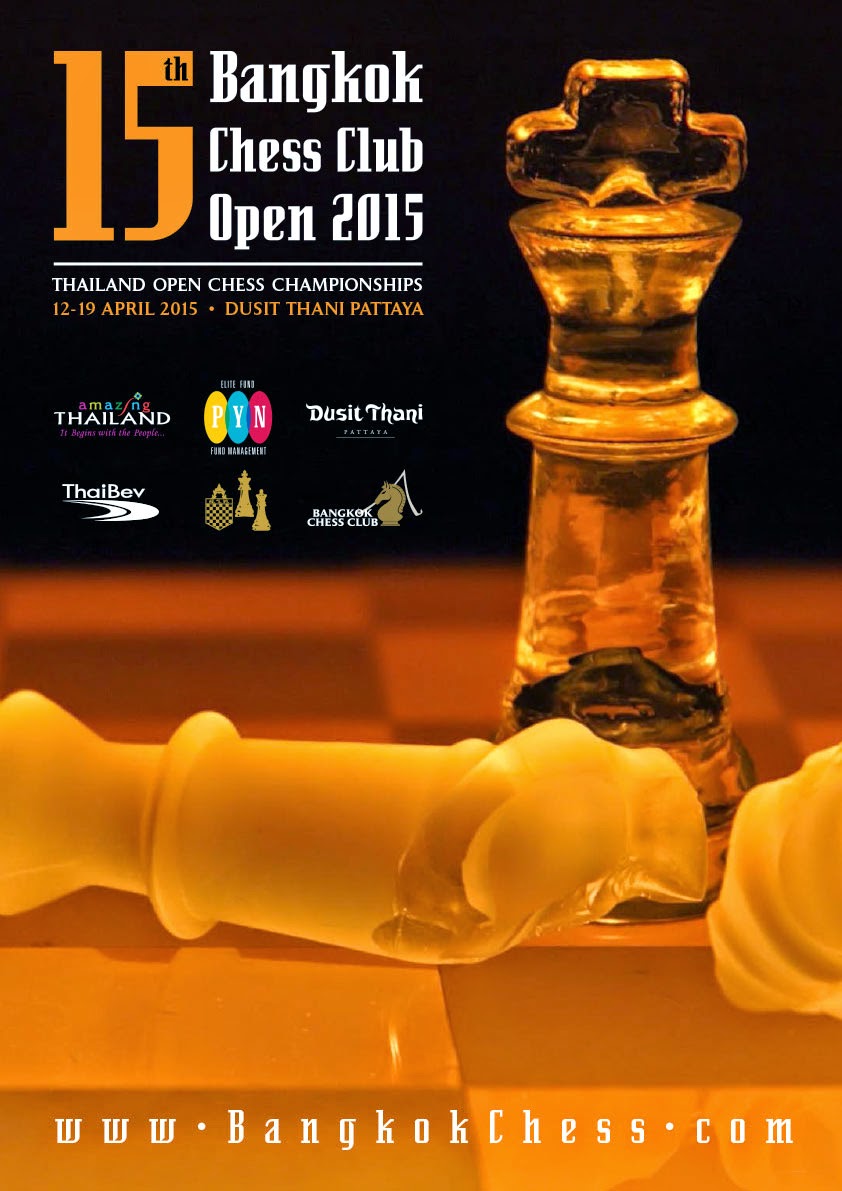 Last few weeks have been crazy so as to clear my desk so as to be able to make my annual pilgrimage to the Bangkok Club Open where on our own expense I will join my equally service minded friends in working day and night to help make the tournament a success!

This time it will be held in Pattaya where the promise of sun and sand has helped attracted a field Chief Organiser Kai Tuorila has informed me should exceed 300 participants!

For all details, please go to http://bangkokchess.com/archives/4485

I was hoping that Yeoh Li Tian could make the trip and so took out his massive water gun from storage (bought two years ago from a shop just outside the hotel) to bring along to help fight off his many fans looking to do battle during the Songkran Festival but sadly the week away from school proved too difficult to negotiate.
Posted by Peter Long at 11:18 No comments: 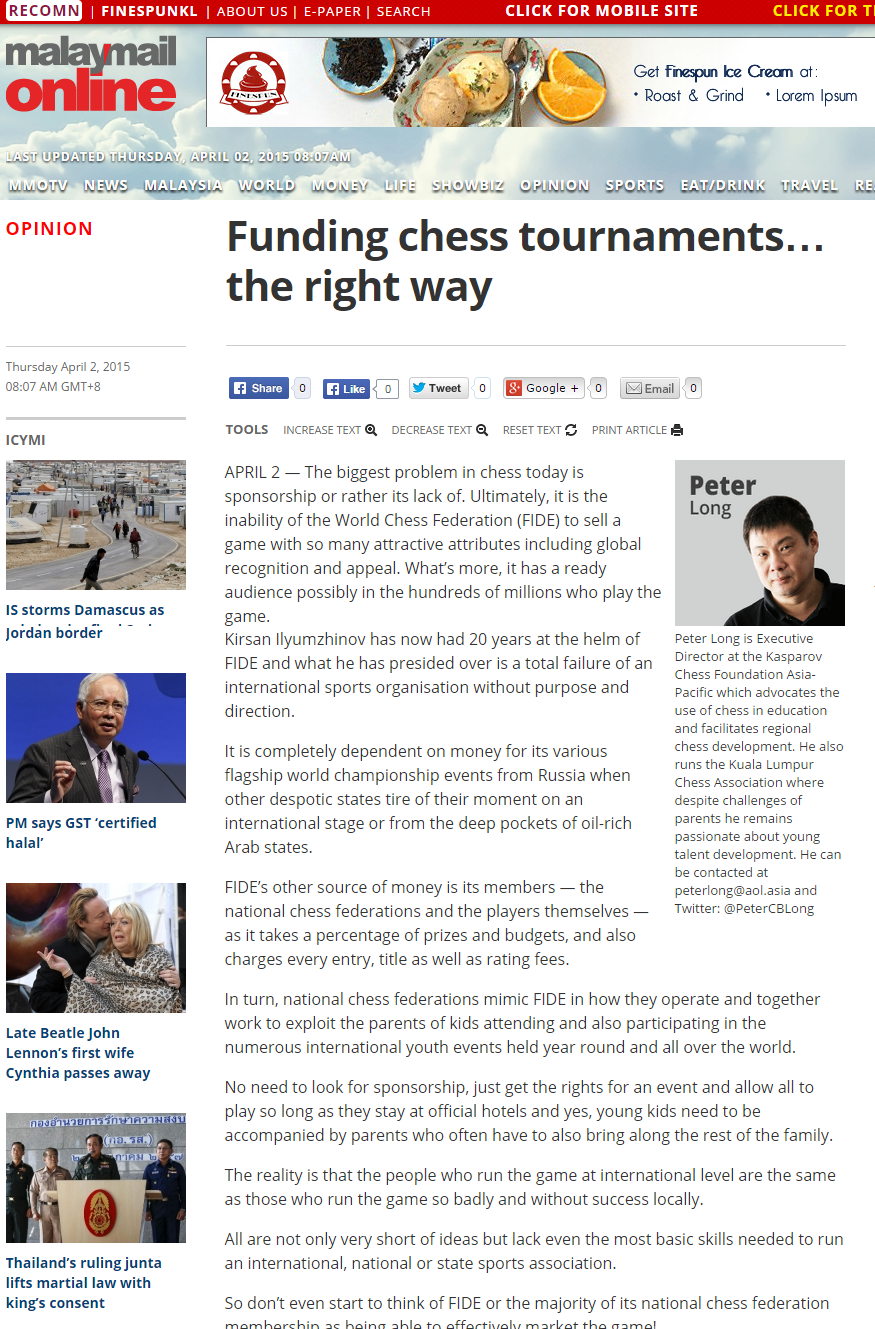 http://www.themalaymailonline.com/opinion/peter-long/article/funding-chess-tournaments...-the-right-way
Posted by Peter Long at 08:15 No comments: