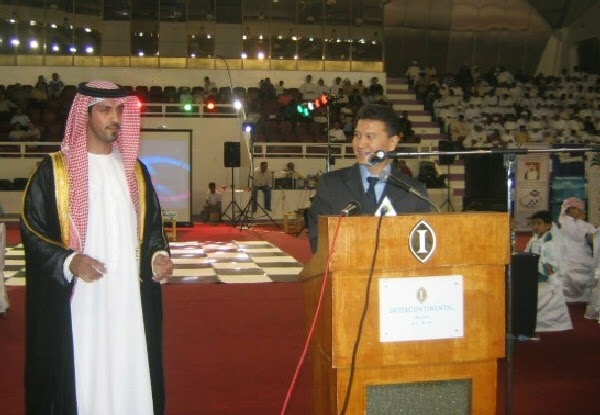 One extract reads: "But now he is doing exactly like Ilyumuzhinov, the UAE embassies are now calling National Chess Federations. He is meeting with his fellow "royalty' to change delegates. A case in point is his ACF Secretary Hisham Al-Taher from the UAE is taking the delegate position from Bahrain, not only hitting a member of the opposing Asian ticket but insulting a National Chess Federation making a mockery of a statehood and a nation’s right to self-determination."

Why this reaction? In what is now clearly the dirtiest FIDE Election in history, it was always clear that the Americas, long the proxy haven for Ilyumzhinov through the efforts of Jorge Vega was almost balanced off by the repulsion in Europe. But he was seemingly unbeatable as Asia was solidly with him and Africa was until now never a factor.

Panic set in early for Ilyumzhinov with Makro & Friends as is evidenced by their frantic efforts - criss crossing the world and shadowing Kasparov where he went - and with increasingly dirty behaviour, all which I have well documented. (see http://www.themalaymailonline.com/what-you-think/article/the-battle-for-fide-ilyumzhinov-vs-kasparov-peter-long and http://www.themalaymailonline.com/what-you-think/article/russias-fide-peter-long)

It was because Asia simply got tired of 8 long years of neglect and more importantly it was literally becoming "Its Time for Africa!" (do see and hear http://www.youtube.com/watch?v=pRpeEdMmmQ0&feature=kp, a nice tribute and quite excellent timing with the FIFA World Cup now going on!).

One tactic (lie) constantly used by Ilyumzhinov with Makro & Friends has been to say to Asians that Africa was completely behind them and then with a mixture of threats and rewards to remind that they could not afford to be on the "losing team" and of course this story was reversed when talking to Africans because then they would claim to have a vast majority of votes already locked up in Asia.

But this was never true and now definitively debunked as can be clearly with the documentation to support the facts at  http://kasparov2014.com/2014/07/01/end-of-the-myth-africa-for-team-kasparov/.

So the battle ground is clearly now Asia where despite the use of use of Russian might to remove delegates while the FIDE Office knowing and illegally participates in erasure and even change of legitimate long standing National Chess Federations http://kasparov2014.com/2014/06/21/protest-by-afghanistan-federation-against-unlawful-removal/ the count is 50-50 and with the myth debunked together with a general disgust at the behaviour of Ilymuzhinov with Makro & Friends and their personal FIDE, the tide is turning.

So what is the reaction of desperate dirty men? It is of course to ignore what the world wants and instead to force their will through by whatever means.

For me it is one thing for Ilyumzhinov to risk bringing shame to Russia but for Sheikh Sultan to do it in a way that puts the reputation of UAE, a much admired and influential modern nation in both the Middle East and with the West into question?, that is perhaps another matter altogether.

Shame of you Sheikh Sultan, must you still listen to the likes of your Abundo, to Borg and such?