Comrade Ilyumzhinov Has Many Moves - All Dirty, Mostly Illegal! 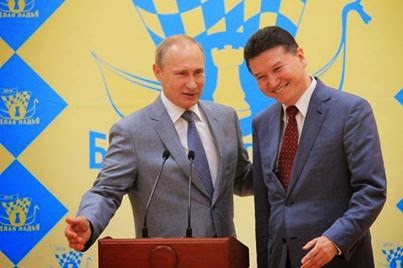 So starts the post titled "Kirsan Ilyumzhinov makes a move by writing a letter"on his FIDE First Campaign Website!

My take on all this?

1. Instead of responding to the open letter of Ignatius Leong stating facts that demanded serious answers, Ilyumzhinov has taken his dirty campaign that has so far seen him sitting down with representatives of governments of countries he has been visiting to complain and badmouth to now putting in a letter? (see http://www.thefidetrainer.com/2014/05/ignatius-leong-hits-back.html)

2. Probably we cannot understand this embarrassing behaviour of a leader of an international sports organisation - after all he has Vladimir Putin has his master, enjoys the Head of State company of the likes of Saddam Hussein and Muammar Gaddafi and is proud of his visitations with Aliens. (see http://www.thefidetrainer.com/2014/02/who-is-kirsan-ilyumzhinov.html)

3. What we can ask is in what capacity Ilyumzhinov is writing? Which brings into question whose complaint it really is as FIDE should have a due process to handle specific allegations, even if made by its autocratic leader, and it is rather peculiar, at least in democratic countries, to take such a complaint direct to another country's leader.

4. If indeed such a letter was written, how can an investigation go forward when already seriously compromised before it even starts by the accuser deliberately making sure that everyone sees it through a self congratulatory publication on his own campaign website and which by the way also diminishes the claim because its context is then just mere election politics where it should be construed as an attempt to try and use a government as a pawn? (see http://fidefirst.com/?p=2568)

5. Ilyumzhinov is not only desperate but clearly does not begin to understand norms of civilised, much less democratic behaviour and institutions, and his lack of statesmanship is a sad reflection of his upbringing and orientation as a despotic leader where the ends always justifies the means. (see http://www.themoscowtimes.com/news/article/riot-police-break-up-kalmyk-protest-85-arrested/228194.html and http://atimes.com/c-asia/CH17Ag01.html)