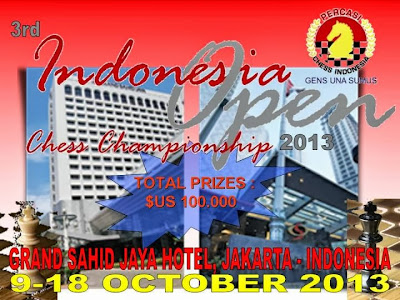 On the 8th of October I will be off to Jakarta for the 3rd Indonesia Open 2013 and am very excited with an event that last year had recognised it was an achievement to repeat for a second successive year and this time around it has already grown to the point where it boasts a record (for this region and even Asia) and total prize fund of USD 100,000!

No wonder there are over 30 GMs already confirmed and there is no doubt in my mind that many more will be coming.

Malaysia will be represented by current national champion Aron Teh and hopefully he will be joined by other members of our national team.

As before I will be helping with international media and working with the many local journalists so expect many insightful interviews (besides the usual daily reports) together with the great photography of Kristianus Liem at the special tournament website built in partnership with Chessdom at http://indonesiaopen.chessdom.com/.