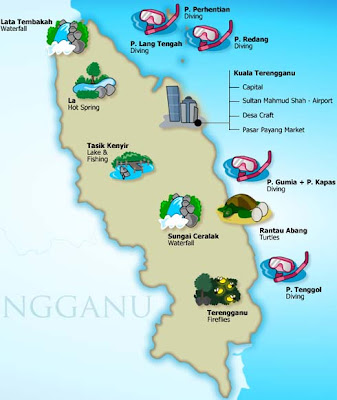 Terengganu is one of my absolute most favourite places in Malaysia and for many months now it had been confirmed that the National Closed Championships would be held there.

Unfortunately there became many problems with dates with the announcement of GE13 and so I am very happy that in the end it is still going to happen although regretfully I will not be able to go as Chief Arbiter as originally planned.

I remember fondly the years I built my entire annual vacation around a drive to the east coast, participating in the Pesta Pantai, hanging our with chessplayers all over Terengganu and Kelantan before, and then, still a bachelor, going off alone to do my 10 days of scuba diving off many different islands including Pulau Kapas of Kuala Terengganu and of course Pulau Redang and Pulau Perhentian. And in the days when you rented your own fishing boat!

So congratulations is indeed due to Terengganu chess and I trust that with this event and also having one of them in Ghalam Sani returning to chess as their Deputy President (and also a Vice President in MCF) we will once again have Terengganu amongst the most active of our state affiliates.

As before the National Closed will be open to previous winners and each state can send four players and the MSSM and National Junior Champions are also invited.

But the main difference is that all have to register through an MCF state affiliate which will endorse them as their players and while others who do not qualify this way can also apply, besides getting their state affiliates agreement, they have to meet a minimum rating requirement so as not to dilute the quality of the event, a consideration that has taken on greater importance with three qualifiers from the men and four qualifiers from the women now joining the National Team.

Under COS regulations, MCF's membership is the state affiliates and at the AGM it was also unanimously adopted that the states would regulate individual membership, in itself a problem for some in that many are also required to do it via clubs!

So gone now are the days one plays in a National Championship as MCF without needing to be a member of a state affiliate.