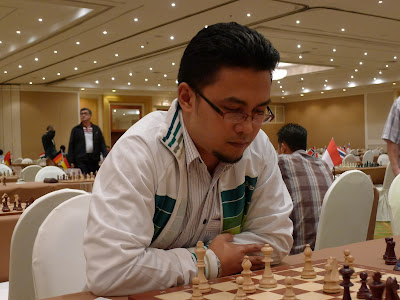 Mas Hafizulhelmi who together with Yeoh Li Tian are on 3/5 and lead the rest of the Malaysians at the 13th BCC Open, qualified with some ease for the traditional winner takes all BCC Blitz Tournament.

There were seven qualifying groups of 14 players each and Mas tied for first in Group B with a 12.5/13 score, his only draw coming in a no holds barred encounter against the Georgian GM Coach of the young Kazakhstan team taking part.

15 players will play a 14 round robin final tonight.

Back to the 13th BCC Open,  Ahmad Fadzli Nayan, Wong Jianwen, Muhd Syazwan Zulkifli and Fong Yit San are on 2.5/5, 50 percent, while Ismail Ahmad is joined by Fong Yit Ho on 2/5 while youngsters Tan Jun Ying and Ryan Chan are on 1.5/5 and 1/5 respectively.

While Mas salvaged a draw, Li Tian was outplayed in a complex attacking game against an IM.

Of our other leading prospects, Ahmad Fadzli in a marathon game suffered heartbreak when he let a draw slip away but Jianwen, Muhd Syazwan and Yit San had very easy wins.