Stories from the Asian Zonals in Tagaytay 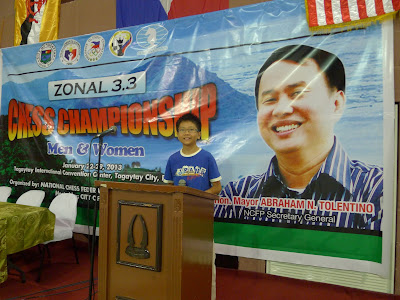 Just five countries are represented at the Zone 3.3 Championships being held in Tagaytay and for many there is a familiar feel to the proceedings with a large delegation from Vietnam and good sized groups from Indonesia and Mongolia comprising most of the usual suspects!

I was told that last year everyone stayed at Character Hotel which is part of the Tagaytay International Convention Centre conplex but this time around only the Philippine players are staying there as the foreign players are instead being put up at the Taal Vista Hotel, the city's oldest and best luxury resort which boasts easily the most stunning views of Taal Volcano and Lake, just a 10 minute walk from the Tagaytay International Convention Centre where the games are held daily.

While there is a barely acceptable 42 players in the open championship, there are  just 16 players in the woman championship which simply means that practically everyone is going to have to meet all their rivals and there will be numerous own country match-ups.

Round four saw big favourites Nguyen Ngoc Truong Son and Wesley So play each other and in as early as in round three the top women have met and all those in contention amongst them would have played by round five or six! So it will be a story of who drops more points and the willingness of team mates to help might be decisive.

Malaysia of course has no title aspirations and also the smallest representation - just one - but Yeoh Li Tian's participation is being very much appreciated especially with numerous comments being made as to the no show from Singapore despite the organisers having gone out of their way to change the dates to accommodate them. This also hurt participation as many of their top girls had to play for their universities during these dates as was Le Quang Liem also being unable to play as he had already long committed to participation in Gibraltar.

The Major of Tagaytay City, Abraham "Bambang" Tolentino is both FIDE Zone 3.3. President and National Chess Federation of the Phillippines General Secretary and he was truly horrified to see his face on the banner (see photo!) as he is currently campaigning for a seat in their House of Representatives! Within hours there was a brand new banner but I kind of like the original as that is so much more the Philippines!

I have seen so many of the young girls playing for Indonesia and Vietnam growing up in the last 7 years, and to put it as delicately as possible, I should only say that I don't envy their officials having to now deal with so many of them starting to become young ladies. But I think this growing up of kids has always been a challenge that all who are in chess has always struggled with, be it girls or boys.