The Rapid Match Goes To Indonesia! 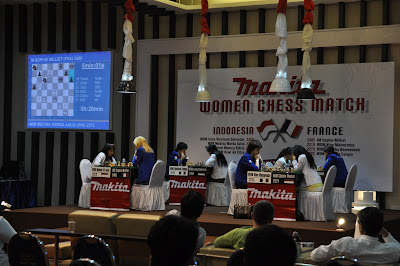 The third round was nearly an amazing triumph of pre-game preparation. It was no exaggeration that while sitting next to the Indonesian coach once the games got underway that I was told that he had done and within 10 minutes it all unfolded exactly as predicted!

But it is another matter to execute and even more so perhaps when you are playing Rapid chess.

For sure the Indonesian girls had come out determined to build on their first day lead and get the three points needed to seal the deal with one more match to go.

In the end Medina Warda Aulia's win went exactly as planned but Dewi AA Citra mixed her moves up (and forgot some analysis) and opted to take a perpetual check. Worst was Chelsie Monica Shite lost her way after building up a completely winning position right out of the opening against her much more experienced position to even lose. But Irine Kharisma Sukandar had less problems with the help of some ready poor moves by her opponent.

So 2.5-1.5 it was to Indonesia. That made it three match wins in a row and now needing just 0.5 points from the final match.

Fittingly it was Medina Warda Aulia who wrapped it up and in doing so taking her score to a perfect 4/4 in Rapid chess. This was however easily her most unconvincing win!

It was seesaw from then on, France striking back to equalise, Indonesia then taking the lead before the last game made it 2-2 which simply meant that Indonesia emerged a convincing 10-6 winners and that France had at least drawn a match.

From tomorrow it will be a different ball game with the Classical chess matches beginning with one round a day and the link to parings and results is http://chess-results.com/tnr87844.aspx?lan=1