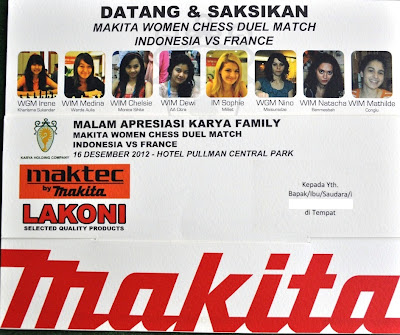 My readers will know that it has been an incredibly hectic time for me chess wise since August... starting with preparing and then coaching our national women's team at the World Chess Olympiad, then returning to run the DYTM Raja Nazrin Shah International Open just a week later, followed by being part of the media team at the Indonesia Open Chess Championship (IOCC), and finally going to the World Youth Chess Championships.

Only the last was long planned for but not at all also taking on working with two very big young talents which entailed numerous and intense visits to Penang that has been for me very enjoyable and satisfying (and I hope also successful) work indeed.

I have just been back from 12 days in Australia where I found time for Doubleroo, unfortunately missing the Asian Schools Chess Championship that I had originally committed to go to (as well as the Penang Open), and now out of the blue I have been given the very big honour indeeed of being the Chief Arbiter at the MAKITA Women Chess Match which will  be held between Indonesia and France in Jakarta from 16-22 December 2012.

More details (coverage?) will follow in this blog for sure but I do already know that 16 December will be an evening of Blitz after the Opening Ceremony (hence the luxury of taking a same day morning flight) followed by Rapid on 17 & 18 December and then Classical from 19-22 December.