MAKITA is now over... and is a huge triumph for Indonesia 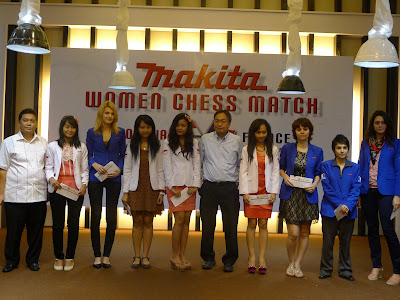 The winners on the stage with guest of honour Utut Adianto on the left and flanked by the two teams is Eka Wirya whose MAKITA sponsored the match.

In the end the results will show that Indonesia lost the single Blitz match on the opening day 1-3 but in four rounds of Rapid chess won 10-6 with three match wins and one draw while in the showcase Classical or Standard format, it was a 9.5-6.5 victory on the back of a 3-1 win in round one, 2.5-1.5 in round two and 2-2 draws in rounds three and four.

The bulk of the major individual prizes based on cumulative scores across all three disciplines went also to Indonesians, Median Warda Aulia on 7.5/9 the biggest winner, Sophie Milliet second wth 6.5 points and sharing third and fourth was Irine Kharismar Sukandar and Dewi AA Citra.

But perhaps in reality this good run of recent results for the Indonesian girls may either be flattering to deceive or perhaps women's chess is really not that good.

And if you watched all the games live as I did, you would I think tend to agree! 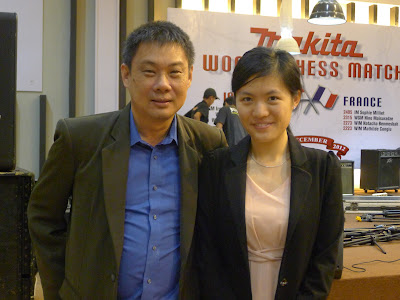 I was having a long lunch with Hou Yifan together with Utut Adianto when the simultaneous exhibition ended soon after the closing ceremony, and we were amazed to learn that Yifan did not have a personal coach but had to share the national coaches with the rest of the China teams. Yifan did not get an allowance let alone a salary from the Federation or any other Sports Organisation in China and this was true for all their players! Even the players winnings were taxed.

All these were questions asked by Adianto who then made the comparison with Indonesia where instead, the players got salaries from the provinces they represented on top of what the companies that also sponsored them gave.

The Indonesia girls get to keep all their winnings and were often also given extra rewards for relatively small achievements. The Federation took care of all expenses, arrange numerous trips and tournaments for them all year round, and provided foreign trainers full time to help them.

Yes, the Indonesian girls have done well. But as a return on investment?

To start with, let me just say that while all are superstars - now enjoying life and having such status to become practically untouchables - I have never seen them work on chess outside the training sessions with their coaches and while I can certainly go on in much more detail and provide more examples, I think my point has already been made.