Indonesia beats France with one match to go! 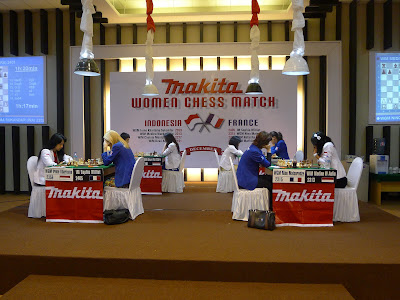 The MAKITA Women Chess Match being held from 16-22 December 2012 at the Sekolah Catur Utut Adianto (SCUA) in Bekasi, Jakarta between Indonesia and France has been a absolute success for the Indonesians!

Now after three rounds of the Classical matches where the French were expected to make a strong comeback, Indonesia has continued to prevail, winning the first 3-1 and the second 2.5-1.5 before drawing the third 2-2. 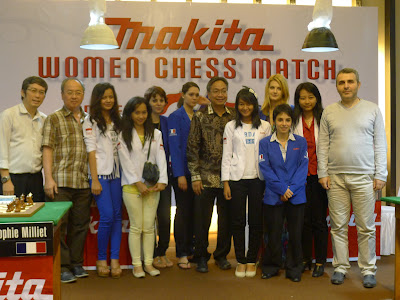 With this the Indonesian team has a score of 18.5-13.5, a five point lead that cannot be overturned irregardless of the outcome of the fourth and final Classical match.

But Indonesia has also won by any possible scoring system and as much as you would feel for a French team that have clearly yet to adjust from European time and have been clearly not at their best, the fact is that the Indonesians too had been with one exception, been also rather hit and miss too. 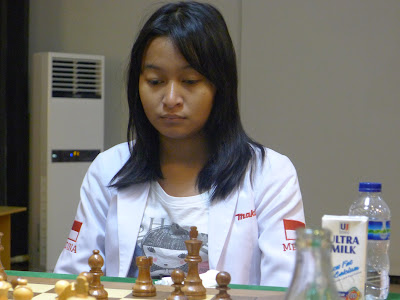 The main reason for the Indonesian victory is Medina Warda Aulia who has been 100% while playing the best chess and 4/4 in the Rapids and 3/3 so far in the Classical says it all.

Co-incidentally, the victory one round before the end has meant that the dinner hosted for visiting Hou Yifan has also been a bit of a celebration for Indonesia but with a very sporting French team happily joining in but of course still very much with one eye on revenge in the last match tomorrow! 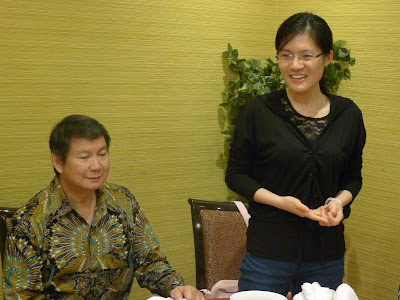 The Head of PERCASI together with the the Leader of Women's Chess Today!