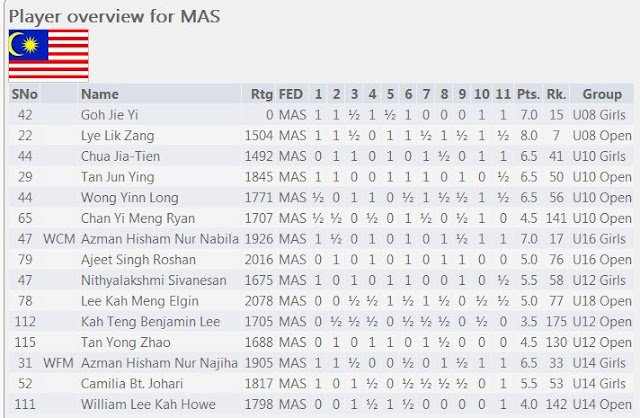 As expected, the best performances have come from the youngest where in the starting stages of chess pure talent rules and so even a small chess country like Malaysia is able to compete so big congratulations are in order for Under 8's Goh Jie Yi and Lye Lik Zang with a hope that in two years time they can maintain these results.

Our relatively large talented group playing in the Under 10 also did well but other than 9 year old Tan Jun Ying, they will all have to compete as Under 12's next year and so will know that it will be challenge to keep progressing in terms of results as can be seen from the performances from those participating in that category this time around.

Nithyalakshmi Sivanesan in the Under 12 and Nur Najiha Azman Hisham and Camila Johari in the Under 14 played much to  their ranking and so have not lost ground and that can also be said for 15 year old Under 16 representative Roshan Ajeet Singh and 16 year old Under 18 representative Elgin Lee Kah Meng but the question they will have to answer is if that is good enough for all five of them given their talent.

Finally it must be said that the performance of the experienced Nur Nabila  Azman Hisham in the Under 16 stands out, and when taking into account her performance at the recent World Chess Olympiad in Istanbul, Turkey, she should now be considered our current No. 1 women player.