Some Impressions and Lessons of WYCC 2012 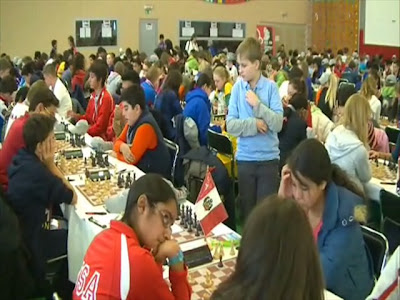 From yesterday, after the end of Round 3, the WYCC 2012 organisers have started sending us bulletins together with a file of 96 selected games and we are now getting bits and pieces of Round 4 even as Round 5 started this morning. With two games today before the rest day tomorrow it is certainly going to be a story of catch-up for them and I certainly don't envy those doing this work!

As an organiser myself, albeit on much smaller scales,I am loath to criticise as I know something about the very real challenges - it is easy to talk but not quite so easy to do! - and I will say that to their credit, which each passing day it is clear that efforts are being made which are resulting in welcome improvements.

From my good friend Vijay Kumar I have now managed, as can be seen, to get a photo of play in Round 3 and it is clear that conditions in this multi-purpose hall at the Dras Centre are a bit tight indeed other than at the top boards. He has also provided this link to the official video also posted at http://www.youtube.com/embed/F2aFfUOKJO8 which readers might find of interest.

Today the rain has come and that is the weather forecast for the next few days. Our contingent is fully ready for this (or at least now are!) but let us hope there are no side effects or consequences to infrastructure as a result of possible heavy rainfall.

But more importantly perhaps for some is that the day excursions paid for by all but 3 of our 32 strong group to Bled/Ljubjlana and to Postonja/Ljubjlana will not be ruined!

Unfortunately I am among those unable to go (Mas has been attending the FIDE Trainer Seminar and one other member is off on his dream visit to Vienna) as Bled is a major tourist spot, with postcard perfect lake, island and castle while Postonja is highly recommended, a fantastic cave complex with a train ride. For both groups, lunch will be at the Slovenia's capital Ljubjlana followed by a city tour.

I have of course been looking at the games of the Malaysians playing here and especially in relation to their opponents and what I have seen only confirms my opinion that in an event such as the WYCC 2012, there are broadly three levels of play, Under 10, Under 14, and Under 18.

At Under 10 level (7-10 years) we can compete because bright young children are all talented and generally speaking, any coaching, be it good or bad has not yet formed them and the need for having the appropriate competition is not yet been critical given their short time in chess. I think it is very clear that it is at this stage that all countries are able to closely contend!

It becomes more complicated at Under 14 level (11-14 years) as talent can still be talked about but there seems to be a clear divide, not so much in terms of knowledge and experience, but in being able to properly apply the same in competition and I think that would be due largely to their getting an uneven chess education.

Once reaching Under 18 level (15-18 years) there is not so much more that can be done if a player at that stage lacks the basics, be it theory (not just openings!), capacity for work, or having sufficient high level competition, and this is especially apparent if he or she has not gotten the right guidance earlier. Today 16-18 year olds are IMs and GMs and in contention for places in their national teams. It is sadly a universal experience to see talents at Under 10 not reach anywhere their potential at Under 14.

I am not especially referring to any of the Malaysian participants at the WYCC 2012 - they are as representative and as good as what we have.

Just look around you as the local chess scene and also that of neighbouring countries, be it a Vietnam, Singapore, or Taiwan, have too many obvious examples which should not be named. I will say however with risk of offending that their success or failure is simply that of parent and child together but hope my frankness is mitigated by fully understanding and appreciating that is their absolute right!