Building on the Indonesia Open 2012 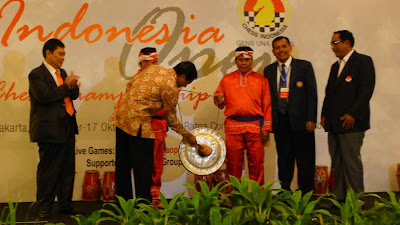 As I briefly mentioned in an earlier post, from 9-18 October I was privileged to be part of the media team at the Indonesia Open Chess Championship (IOCC) 2012 and it was a hectic time indeed!

What surprised me what not so much the scale of the event but the huge number of people that were involved in the organising and it would be no exaggeration to say that practically everyone in Indonesian chess came together to help out.

Indonesians are a tolerant people and I was really impressed at the pride and unity to make the tournament work!

One challenge that Indonesia has always had was that because it is such a huge country it is often unnecessary for locals to look beyond the borders of a country spanning three time zones and with a territory of 1,919,440 sq km making it the 16th largest in the world.

But I well remember the incredibly strong Indonesian teams of the 80's where they could beat just about anyone and were constantly challenging for top honours in Asia.

The PERCASI leadership is determined for IOCC to become one the world's premier international open chess championships and so is now confirmed that there will be another in 2013 and indeed the foreseeable future.

What is perhaps even more interesting is that new efforts are going to be put into local chess development in parallel with IOCC.

In this road, as that of every National Chess Federation in the world, PERCASI has no silver bullet and may have to wait for between 5-10 years to restore Indonesian chess to some of its former glory and while I think many understand this, in today's fast paced work it would take something special to stay the course.

But in four years their women's chess has seen a transformation so I wish them all the best with their men!