Fool Gone Mad are the Champions! 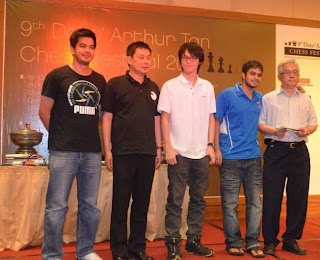 In the first two days of play, Olympiad bound Zhou Ren carried the burden of top board while I too pushed up to second board and together with big contributions from Zaidan and Sumant, we put the team in a strong position for the final day of play when Jimmy joined the team for the all important push in the last two rounds.

All in all it was a great success and a really a tribute to fine team spirit together with a more balanced line up which made the difference in edging the more fancied top ranked all Malaysian Chess Tigers team which boasted FM Nicholas Chan, IM Mok Tze Ming and Yeoh Li Tian.

Sumant and Nicholas will not be joining fellow national representatives Mok, Li Tian, Jimmy and Zhou Ren as they travel tomorrow together with IM Lim Yee Weng to represent Malaysia in the World Chess Olympiad being held in Istanbul but will most certainly have their very best wishes for  every success and happily enough I will also be there as coach of our women team.