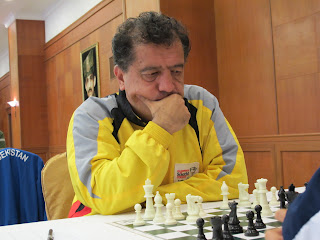 After 6 rounds, two thirds of the way through the Brunei Campomanes Memorial Grandmaster Open, there is a four way tie at the top on 4.5/6 with Tahir Vakhidov grinding down Yeoh Li Tian to join Dzhumaev Marat, Pitra Andika and Yap Kim Steven in the only decisive game amongst the leaders. 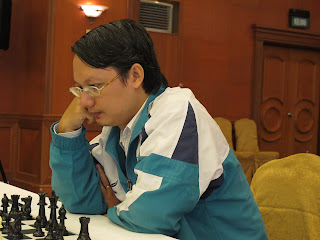 Earlier in Round 5 the lead had once again changed hands when Dzhumaev Marat beat Dao Thien Hai who failed to hold the black side of the Sicilian Defence.

Joining him on 4/5 is Yap Kim Steven who inflicted the first loss on Sharma Dinesh K, and unheralded Pitra Andika who took advantage of a horrendous blunder by Oliver Dimakiling who hung a knight in a completely winning position.

The Vadkhikovs had earlier drawn quickly as did GMs Nguyen Anh Dung and Sriram Jha, of course Dao and Dumakiling, Turgueza Mari Joseph who beat William Lee and Mas Hafizulhelmi who won over Mohd Aliuddin, and they were all eventually joined by Yeoh Li Tian in a tie for 4th to 11th places with 3.5/5, the last after a hard effort to hold Richard Bitoon in a Rook & Knight vs Queen endgame.