By Unknown - April 09, 2012
In round four, of the top four boards, three games went all the way, but the shock of the round was 13 year old Yeoh Li Tian's win over top seeded Oliver Barbosa who in the previous round had prevailed over Malaysia's top player Mas Hafizulhemi. 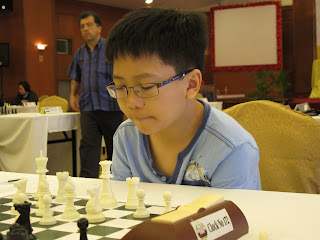 Young Li Tian showed great resourcefulness to refute Barbosa's attack to take home the full point against an admittedly somewhat off form player but take away nothing from his giant killing feat that Malaysians have already seen quite a few times before.