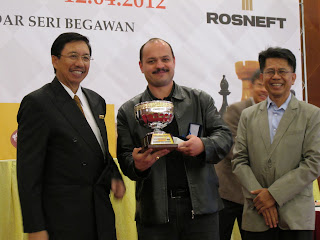 With a last round win over Indonesian FIDE Master Pitra Andika, until then the surprise tournament leader, Grandmaster Dzhumaev Marat emerged as the champion of the Brunei Campomanes Memorial Grandmaster Open 2012.

It was a good day for the Uzbekistan players as young International Master Jakhongir Vakhidov also won his last round encounter against fellow IM Sharma Dinesh K from India to take second place.

The Brunei Campomanes Memorial Grandmaster Open 2012 was organised by the Brunei Chess Federation (BCF) at the Orchid Garden Hotel in Bandar Seri Begawan from 7-12 April with a prize fund of USD 10,000 provided by Rosneft. 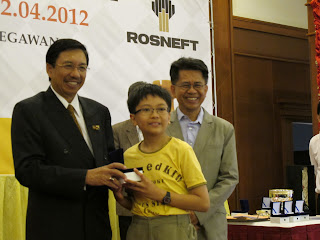 Young 13 year old Malaysian Yeoh Li Tian despite being rated 2204 proved to be the star of the event, finishing in a tie for 4th-8th places while successfully playing 4 Grandmasters, 2 International Masters and 1 FIDE Master and missed an IM norm by just half a point.