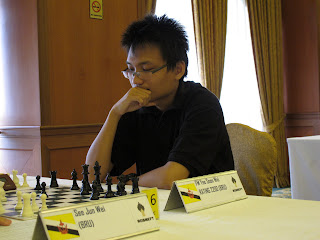 It was no surprise that FIDE Master Yee Soon Wai comfortably made his third and final IM norm at the Brunei Invitational Grandmaster Torunament held in Bandar Seri Begawan from 13-17 April 2012.

Yee has been for some time now Brunei's No.1 player (by some distance) and has been a very active participant in regional events where he has gained valuable experience through playing against numerous Grandmasters and International Masters while at the same time getting the full benefit of a personal coach in terms of both opening preparation and games analysis from their National Coach Grandmaster Tahir Vakhidov (now in his sixth year there!).

The Brunei Chess Federation has been a big supporter of the young man financially in their joint quest to have their first ever IM and he has not disappointed by making IM norms at each of the Round Robin tournaments organised each year at home to give him that extra bit of help.

It has taken sometime for the first fruits of the vision of BCF President Hj Zainal Ali to get a homegrown Grandmaster, a journey that begun in over 10 years ago in 2000 and one has to admire the sustained effort year after year by a dedicated committee (with just too many contributing members to be able to mention all by name) and the hundreds of thousands of dollars raised and spent.

Full results and games at http://chess-results.com/tnr70403.aspx?lan=1