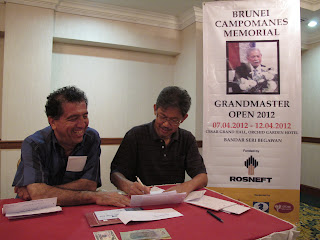 With 40 players from 8 countries including 7 Grandmasters, 5 International Masters and 3 FIDE Masters, the Brunei Campomanes Grandmaster Open 2012 gets underway today.

Organised by the Brunei Chess Federation from 7-12 April under the leadership of its President Hj Zainal Ali with Vice President Pg Abdul Rahman Yussof the Tournament Director (in photo on the right with Grandmaster Tahir Vakhidov distributing player allowances), the latest edition of the Campomanes Memorial was made possible through a prize fund of USD 10,000 provided by Rosneft.

Top seeded is Oliver Barbosa from the Philippines who is back for his third successive annual pilgrimage to Brunei and he is expected to have serious competition from Vietnam's Dao Thien Hai and Uzbekistan's Dzhumaev Marat and Vakhidov as well as from experienced competitors Richard Bitoon, Nguyen Anh Dung and Oliver Dimakiling.

Round by round parings and results for the 9 round Swiss Tournament will be available at http://www.chess-results.com/tnr70091.aspx?lan=1.

The Brunei Campomanes Grandmaster Open 2012 will be followed by a 10 player Round Robin FIDE title norm tournament held from 13-17 April 2012 and more chess is of course available soon after at the 750 Years Melaka International Chess Festival in Malaysia from 20 April to 1 May 2012.