Some of the Usual Suspects 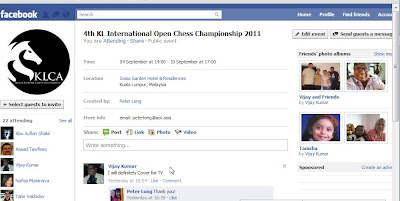 It always seems to work like this. The sponsorship is confirmed and then a scramble to get venue, hotel, etc. followed by the formalities of registration, etc.

Then the initial announcements of the event. On KLchess and FaceBook, with our friends like Susan Polgar, and at Chessdom which then leads to the FIDE website. Next regional national chess federations are informed and of course with few exceptions there is no acknowledgement let alone replies and in some cases whispers are heard of jealousy and petty actions which hurt no one but the players they claim to represent.

Within a week, some of the usual suspects, regulars who have come to the KL Open before, are in contact and this is going to be pretty much it (other than dealing with an enquiry from time to time) until a month before when we will get a flood of entries (especially from India, Singapore and Indonesia).

But for now we have for sure from some dozen countries:

Of course, the local chess community is conspicious in its silence but then again, that is the Malaysian way!