By Unknown - March 08, 2010
The Advanced Parachute WGM Tournament to be held from 7-14 March 2010 gets underway today at Uni-Resort in Cox's Bazaar, Bangladesh. 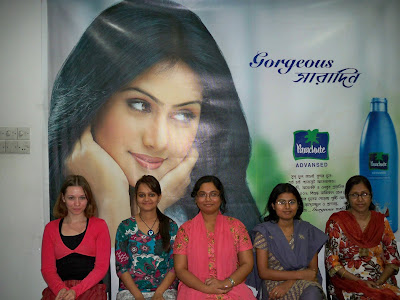 After a 10 hour bus ride from Dhaka in a luxury bus through beautiful and often spectacular countryside, the participants which include GM and IM hopefuls (L-R in photo above) Veronika Minina (RUS), Dhyani Dave, Kiran Monisha Mohanty (IND), Shamima Akter and Tanima Parveen (BAN), were still all bright and sparky and very much looking forward to the games starting the following day.

The full list of participants can be found at: http://www.chess-results.com/tnr31218.aspx?lan=1

Organised by Six Season Chess Tournaments, this is the first of tournaments planned monthly by Grandmaster Niaz Murshed to provide title and rating tournaments for Asian players and there will be a GM event following this WGM tournament from 14-22 March 2010.