Some Blasts from the Past (Taken from the now defunct KLChess.com)

Simple enough? Well perhaps, but there have been some parallel developments.

The first is that a Wilayah Persekutuan Chess Association was recently registered with the Registrar of Societies and with indecent haste (despite no activities or membership) accepted as a member by MCF with the expectation that KLCA would be forced to become it's affiliate!

And that in essence guided the answer of the MCF Honorary Secretary.

Well there is a problem is the KLCA is the legitimate organisation registered with and duly recognised by the Sports Commission whereas MCF and all its affiliates are not!

There is also a second related problem in that the Malaysian Malays Chess Association (PCMM) has been found to have been illegal for many years and yet it seems that several PCMM representatives at MCF Annual General Meetings have been happily running for and been elected to hold office in MCF while being fully aware of this situation.

(I have always wondered if the MCF Constitution actually allows a racially based grouping to be a member - and certainly if there ever was, there is clearly no need today for a PCMM).

Perhaps in the context of a bigger picture we should also appreciate that in MCF the Honorary Life President is now also the President (although he intends to step down the minute a new President can be found - but apparently not Edmund Santhara). And dare I say that there are at least three years of accounts that raise serious questions at a glance and would certainly have difficulty standing up to scrutiny.

I also wonder if officials who allowed their association to be declared illegal can still run for office?

Of course we have to give some benefit of the doubt and part of the problem might be simply that standard paperwork to help document such as letters, even issuance of receipts is not the strong point of the Honorary Secretary and certainly procedures are very poor indeed when entry fees are encouraged to be in cash or banked into a personal account (apparently for his convenience). 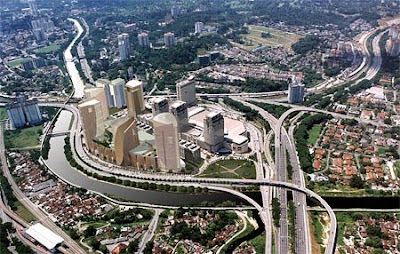 Malaysians are all caught up in the coming Dato Arthur Tan Malaysian Open (DATMO) and why not? It is the only thing going for it - thanks to 83 year old Dato Tan Chin Nam who recently stepped down from being the Malaysian Chess Federation (MCF) President again.

And apparently MCF has a new President, perhaps the man that Dato Tan was referring to when he said that he had finally found the right person after waiting over 20 years to replace him.

But what are the facts? I am not involved much in the local scene but this I do know:

1. The new MCF President does not play chess

2. New Honorary Secretary Gregory Lau has avoided me since I proposed we organise an IM/rating event for just RM 10,000 to help Lim Yee Weng meet his title requirements and for talents like Nicholas Chan to get on the IM track. Why? He was enthusiastic and sought an immediate meeting with the new MCF President to facilitate this. I think we all can easily guess why!

3. Malaysia will not be in the 1st World Mind Sports Games being held in Beijing from 3-18 October 2008 because somehow we did not enter. But 77 National Chess Federations did knowing that even the airfare was paid for!

5. Hopefully we do remember to register in time for the Olympiad - this is one event I am sure we cannot ignore.

6. Is our youth development going anywhere? At ASEAN Age Group level Malaysia failed miserably, our 40 odd delegation finishing well behind the 10 or so from Brunei. Maybe that explains the 3 Malaysians in the World Schools Championship in next door Singapore.

7. Finally, do we understand that Dato Tan can't live forever and I have been told that DATMO is coming to a close? But being what he is, he also cannot let go and while he lives will still insist knowing it all and on organising whatever he wants from time to time - whether a GM Tournament for Mas Hafizul (no problems with that but how about our No 1. IM Wong Zi Jing?) or an offer to sponsor a GM Trainer, etc. Is this good or bad? Go figure!

I am not optimistic for my country - the MCF Council looks like nothing more than a reshuffle and so the level of competency/commitment remains the same.

New President, new day? It does not seem so.

But if we are just looking to get a new Dato Tan, (although he is really nothing more than a patzer who does not understand that in chess his only value is that of a dumb patron when he spends) at least there will be some money for the game.

Then I fully agree that Dato Tan's 20 year quest would have not been in vain!

Is this the new MCF? Please prove me wrong! (Wednesday 5 November 2008)

It has been a long time since I commented on the local chess scene because it is almost always bad.

My good fortune was I was able to avoid this by travelling a great deal in the last few months but recently I was forced into some interaction with some would be and also current members of our national teams (more hearing from them about the behaviour of MCF officials) at both youth and senior level.

With the Singapore-Malaysia match now in limbo it is hard for MCF to sell the prestige of national representation and the new "hot deal" is the World Youth Championships. So we did send some players to Vung Tau - good kids all and with some talent and I hope they all develop their promise in spite of the environment they have to play and train in - but the real story is why so few?

No one dares to be named for fear of being victimised further but apparently if you are not part of "the gang" then you cannot be selected!

In the meantime we still ignore the obligations of participation in major events in Asia such as the Asian Junior Championships to be held in Chennai, India in December (there is also the Asian School in Kandy, Sri Lanka in the same time frame). I thought my readers would like to know about these events!

And there is the team that is going to the 38th Chess Olympiad in Dresden that was selected via at best an obscure process but what is worst is that it was clearly without any rationale for the future (of course assuming there was indeed a national development plan in place).

Does anyone think it makes a difference sending players past their sell by dates to try and fight for a bit better than 80th place as opposed to 90th or 100th place? That is why if I was actually asked to play (as feared necessary by some) I would have burst out laughing and be the first to admit that 9 year old Yeoh Li Tian would be a much better choice!

I also understand that our players had to come up with RM 1,000 each as MCF was short of funds! Sadly it would seem that the useless new and non chess playing (and still not paying) MCF President is proving me right! 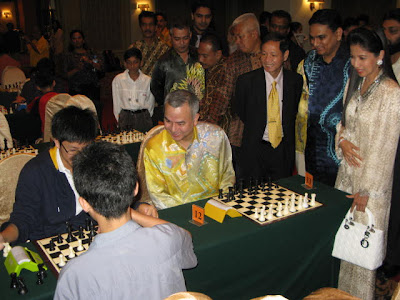 Filippov received RM10,000 for the win in the Open category at the six-day tournament, which attracted 140 participants from 11 countries.

China's Wang Rui who lost out on tie-break to finish second was still a happy winner as he completed the requirements for the International Master title with his fine performance.

A total RM45,000 prize money in cash was awarded to winners by the Raja Muda of Perak, Raja Dr Nazrin Shah, himself a strong chessplayer in his university days, and his sister Raja Dato' Seri Azureen.

While Mr Leong congratulated the KLCA President and Masterskill CEO on his excellent work both in Malaysia and at ASEAN level, Mr Santhara confirmed a long term sponsorship of the KL Open by Masterskill and reminded the audience that the KLCA, as a registered sports body under the Malaysian Sports Council, was committed to youth development and would be taking chess nationwoide in this context as a Nation Building CSR (corporate social responsibility) project.

International Master Manuel Aaron - an Asian and Indian chess legend - also graced the occasion as the tournament guest and gave a special simultaneous chess exhibition to a National Junior Selection.

The international level chess tournament was jointly organised by the Kuala Lumpur Chess Association and Malaysian Intellect Development Foundation with the support of the Junior Chamber International, a Worldwide Federation of Young Leaders and Entrepreneurs, manged by Intchess (M) Sdn. Bhd. and sponsored by Masterskill University College of Health Sciences.