Written in 2003, this sure looks a lot like the FIDE titles awarded to trainers after you take away the Senior FIDE Trainer title which currently cannot be earned anyway!

Every trainer is useful in specific stages in the progress of a chess-player. We could try to categorize chess trainers as follows:

First-Level Trainer: The trainer who will teach the student the basics and bring him into contact with the world of chess. One of his main aims is to infuse the student with love and respect for chess. DEVELOPMENTAL INSTRUCTOR?

Second-Level Trainer: The trainer who will teach the student his first openings, simple tactical motifs and, generally, will introduce the student to the aspects of working and learning. NATIONAL INSTRUCTOR?

Third-Level Trainer: The trainer who will teach the student, first and foremost, the theory of the middlegame and the endgame. Moreover, he will work closely with the student towards the creation of the student's personalized openings repertoire, which he will also help enrich with new ideas. FIDE INSTRUCTOR?

Fourth-Level Trainer: The trainer who will continue in the footsteps of the previous one, but will also introduce the student to other important aspects of chess, such as the concept of and preparation for competitive success. Trainers of such calibre and skill are very scarce, and are only necessary to those chess-players who wish to reach a high level of play or seek competitive success in any form. FIDE TRAINER?

China are the First WMSG Champions! 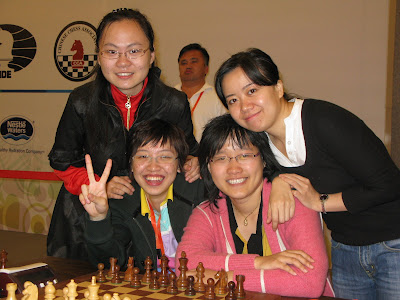 The 1st World Mind Sports Games has concluded and by sweeping the Team Rapid events China is only now finally 100% sure they are the overall champions!
Until the very last move both Ukraine and Russia had a real chance of spoiling the host's party and all credit to the young Chinese players who pulled through so soon after a the disaster of the Team Blitz when two Gold medals were lost in the finals.
Looking at the final standings you cannot imagine how close it all was:
1. China 4 Gold, 3 Silver, 2 Bronze
2. Russia 2 Gold, 1 Silver, and
3. Ukraine 1 Gold, 3 Silver, 1 Bronze
I was handling the top boards every day during the games where as top seeds China almost permanently camped out event after event and I have never seen at such close quarters how a group of young players was subjected to so much pressure to succeed.
All were guilty without understanding it - the officials, coaches (naturally), so called friends, expectant media, even perhaps the organisers.
Until the overall victory was confirmed with victory in the finals, this memorable and meaningful picture that I persuaded them to let me take just before a must win game is the only picture you will see of the Chinese womens team taking a moment to relax and let it out the entire event!
Congratulations China! Your players deserve to be Champions.
Posted by Unknown at 21:20 No comments:

Duties of a Match Arbiter 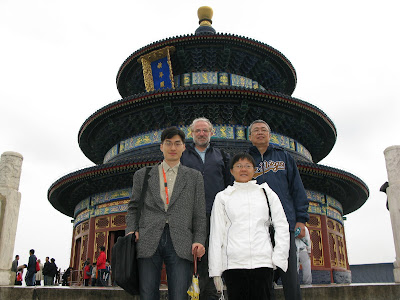 The 1st World Mind Sports Games (WMSG) is the second such event dedicated to "game type" sports endorsed by and supported by the International Olympic Council that I have been involved in (the other of course being MAIGOC last year).
Both the WMSG and MAIGOC (as events of this type will) share two special charateristics which differentiate them significantly from "normal" chess tournaments but if FIDE chooses to continue to go down the path of chess as sport we will certainly have to get used to these type of events!
First is that we are part of a multi sport event and there are common rules and obligations that have to adhered to. It has been a learning experience for many players (even officials) to realise that the event is less about them than for all!
Second is that there are big physical demands. We have games from 10 to 7 daily, and in blitz and rapid play format (no classical chess as that takes too much time if the objective is to have many medals at stake). There is great stress and tension from having to perform game after game, in one match after another in quick succession, and a lot is at stake.
The arbiters (we are called referees here) also realise our great responsibility as the wrong decision can be the difference between Gold and Silver and that first or second place in the overall standings.
Normal rules of play have had to be modified and we even have Yellow and Red cards to give warnings to players before the ultimate penalty of forfeit.
And the Appeals Committee must now start to understand that they have a big job and that if they agree to be a member it is not for a line in their resume or even some paid holiday (not the case here I think) but a big job demanding high standards of integrity and a desire to be pro-active to do the right thing.
The experienced and competent arbiters amongst us (some which are representing a "Gang of Four" in the picture above which was taken at the Temple of Heaven!) understand that all arbiter jobs are diffferent but equally important.
A match arbiter has to immediately pick up a problem during a game and to intervene for fair play and also to make a call in case of dispute and if not also a strong and experienced player he or she cannot do this job (it is no accident that the four above together with me and a few others are all former chessplayers of a good level and so are handling the top boards and matches).
There is also the protocols involved in getting results confirmed by players and captains and the setting of DGT boards and clocks with various configurations of increment time controls.
Give me the supervising job anytime!
Posted by Unknown at 08:20 No comments: 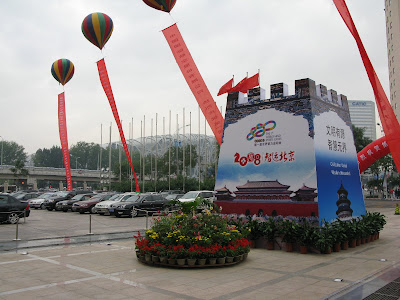 I am one of the few foreign arbiters fortunate enough to be at the 1st World Mind Sports Games in Beijing and the picture is the view looking out at the entrance of Beijing International Convention Centre (BICC) where the games are held (and in the background is the famous Bird's Nest we have all been so used to seeing on TV leading up to and during Beijing 2008).
Our schedule unfortunately is rather hectic - from 10 a.m. to 7 p.m. daily (and for unlucky ones like me who have other duties it is usually back to work after dinner) and so not much time to do anything else besides sleep!
We lowly match arbiters are staying at service apartments nearby (10 minute walk), two to a room, the same accommodation the athletes at Beijing 2008 enjoyed. Meals are at the main hotel within the apartment complex and there are also all sorts of recreational facilities such as restaurants which I suppose was necessary to keep the athletes sane and to make sure they spent their dollars!
Full coverage of the 1st World Mind Sports Games is available at www.2008wmsg.org/en and don't forget there are live games at 2008wmsg.fide.com.
Posted by Unknown at 22:05 No comments: